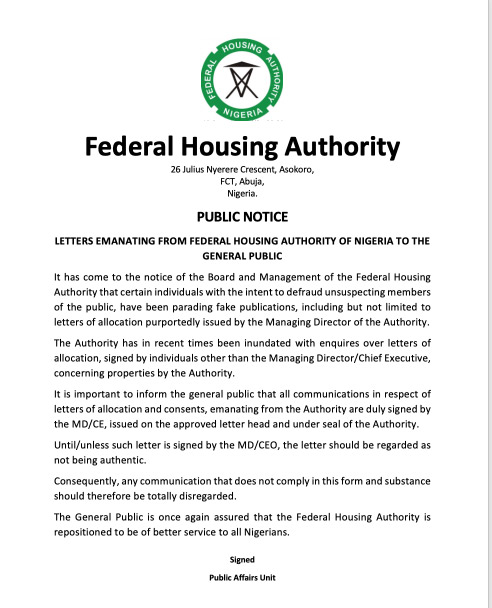 It has come to the notice of the Board and Management of the Federal Housing Authority that certain individuals with the intent to defraud unsuspecting members of the public, have been parading fake publications, including but not limited to letters of allocation purportedly issued by the Managing Director of the Authority.

The Authority has in recent times been inundated with enquires over letters of allocation, signed by individuals other than the Managing Director/Chief Executive, concerning properties by the Authority.

It is important to inform the general public that all communications in respect of letters of allocation and consents, emanating from the Authority are duly signed by the MD/CE, issued on the approved letter head and under seal of the Authority.

Until/unless such letter is signed by the MD/CEO, the letter should be regarded as not being authentic.

Consequently, any communication that does not comply in this form and substance should therefore be totally disregarded.

The General Public is once again assured that the Federal Housing Authority is repositioned to be of better service to all Nigerians.